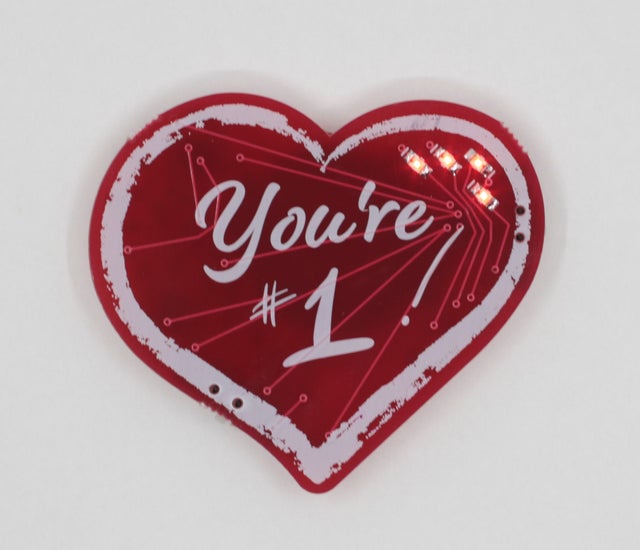 A snarky love letter to everyone who loves neat and tidy circuit board layouts.

Add to Cart
It's a surface mount solder-it-yourself kit that drives 4 LEDs in a heartbeat-style blink pattern by cascading two 555 timers.  It also is a terrible, terrible, awful layout.  Especially if you like things to be straight and 45 and 90 and neat and tidy.  Give it to yourself as a positive affirmation that you really do kick ass despite your oddities, or give it passive-aggressively to your "favorite" person.

Not you ordinary PCB! Traces with acute angles.  A word that's backwards on the bottom silk layer.  Mini-MELF diodes that like to roll off the table or launch out of your tweezers.  Components at all angles.  No reference designators on the silkscreen because gosh darnit they just junk up the PCB, don'tcha think?  Guess you'll have to refer to the assembly diagram to figure out what goes where.  And who doesn't love a constant reminder that they're #1?

The circuit is pretty special too, I mean, anything involving 555 timers is special.  This circuit uses two of them - one provides the lower frequency roughly once-per-second pulse train, and the other is set up to output a higher frequency roughly 10 Hz pulse train.  The first timer's output is hooked up to the RESET input of the second timer.  So the high frequency timer's output is only on for long enough for 2 pulses, then it's off for the remaining of the 1 second.  The result is a cool heartbeat-style LED blinking pattern!  Thud-thud......thud-thud......thud-thud.

OK, just to prove we don't hate you _that_ much, the smallest components are 0805s, so it's not too bad though my old-ass eyes still prefer magnification.  We color-coded them and include a key to what color is what value.  We even give you EXTRA PARTS.  We also included an ON/OFF switch because only devil blinky boards don't have them.  We also included a second blink/no-blink switch so that you can have your LEDs solid on if you prefer.  See?  We actually truly love you in our perverse way.